CRISPI® boots have been manufactured in Italy for more than 40 years and this exciting range of hunting/ outdoor boots has just hit the New Zealand market. CRISPI® started out small, like many companies — handcrafting their boots in a small factory located in Veneto at the foot hills of the nearby Alps, which was the ideal place to produce mountain footwear.

They have a good combination of talent, tradition, quality and experience which has seen this family-run business evolve until they now distribute their products to over 54 countries around the globe, including the likes of Switzerland, Germany and France. When it comes to footwear the words “Italian made” have always stood for ‘the best quality you can buy’ — a reputation hard- earned over many decades.

The CRISPI® range uses premium boot components, including Vibram soles which are the clear leader in sole manufacturing and also Gore-tex®, a world leader in waterproof fabric. Footwear and Apparel NZ are importing CRISPI® boots and distributing to a number of

specialist retailers across NZ; they’ve carefully chosen a number of models out of the CRISPI® range which will suit all terrain and conditions in NZ. Henk from FAA showed me the range in my store, and as luck would have it the majority of the sample boots were in my size (11) which was pleasing; most samples I look at are a size 8. So I had the luxury of trying on a few pairs in the store and strolling around for a few minutes at a time.

I have found when trying on new boots for the first time — as I’ve done plenty of after 20 years in the industry — that if you listen to the feelings in your feet they’ll immediately tell you if the brand of boot suits your foot or not. When you take the first few steps they should be comfortable, without any discomfort or pressure points. Don’t ever persevere with a pair that are uncomfortable or just don’t feel right, as this will only get worse. Boots can be a big investment, so they need to be a perfect fit!

I personally like a mid-cut or standard height boot, so the 2 models that stood out for me were the Dakota and the Valdrez; they were both pretty damn comfortable and it took me a long time to decide which pair I wanted to trial. I’ve had a dodgy knee lately and after some consultation with a few specialists it’s been suggested I should maybe try a more flexible shanked boot while hunting, rather than the rigid types I have always used. So with that in mind I decided to go with the Valdrez, as this felt a little softer than the Dakota model. One thing I noticed when putting on the CRISPI® range was the way their boots hug your feet; this is a new technology that CRISPI® have developed called AFS – Anatomic Fit System — which is a wrapping of the foot, and TWT — Thermo Wire Technology — which gives extra support to the upper while also supporting your foot.

I had a couple of guided meat hunts to do which were ideal to put my new boots through their paces. My companions were three retired hunters who were after a few deer to fill their freezers before the summer barbecue season.
We left the hut and travelled to a good spot on a high vantage point which overlooks a very productive valley, sheltered from the westerly wind, and it wasn’t long before a deer was spotted feeding, along with a yearling, on the face of a creek a good distance away. So we decided on a stalk from where we were.

We dropped down out of sight, to the bottom of the gully, and gradually made our way in the animals’ general direction. One good thing about new boots, apart from being shiny, is that they remind you about how good new tread is, and the extra grip you have under your feet again. We were taking our time; and I had to remind myself more than once that we had no reason to do otherwise. We arrived at the ideal spot to shoot from, only 200 yards from where the deer were. Only problem was … the deer were no longer there! The nice greenish face where I had predicted they would have stopped on to feed was empty. They must have dropped further into the creek out of sight, so a quiet stalk to get up real close was now required.

The scrub height was about waste height, so an offhand shot was on the cards. Bingo! I spotted the backs of two deer standing in the creek feeding on the greenest of the grass in the area; of course they know where the best feed is. Now only 70 yards away, I whispered to my client to take the bigger one. He raised the rifle, which was wobbling a bit too much for my liking so I offered him my tripod as a rest; that did the trick and the deer dropped on the spot with a nice clean shoulder shot.

Now my boots were going to get an even better workout I thought to myself, as I made the deer into a pack and started the climb uphill. The Crispi Valdrez boot is by far the most comfortable boot that I have worn to date. The support and the wrapping sensation around your foot is awesome and even when I had that extra load on they still felt great. I would happily recommend them to anybody who’s after a softer type or a general purpose hunting/ tramping boot, and for a top quality product they’re great value — retailing at only $499.00. 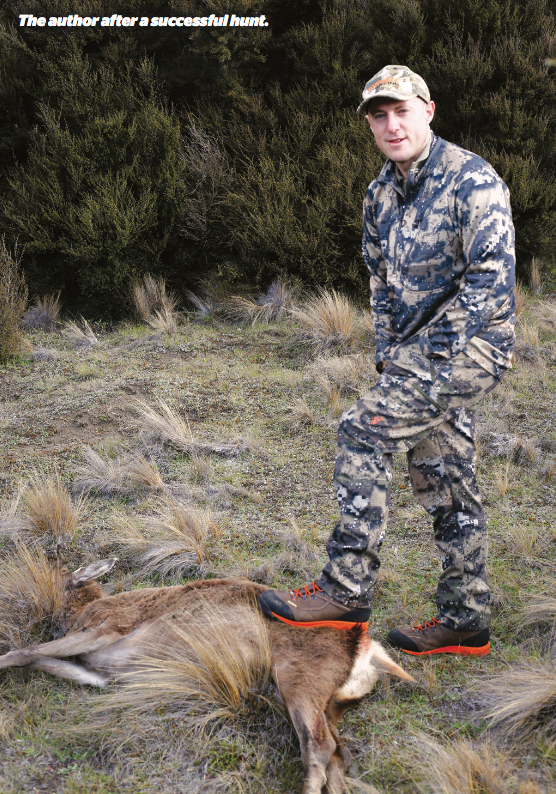